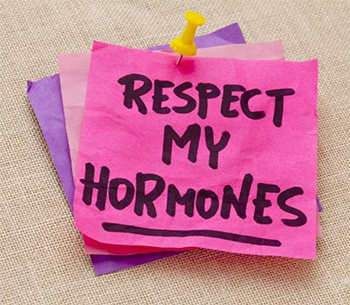 5 HORMONES THAT ARE AFFECTED BY TRAINING…

Hormones are one of your body’s main signaling systems. They are like tiny traffic cops: They direct biochemical messages that regulate everything from your sex drive to your metabolism, mood, sleep, and fertility.

One natural way to help keep your hormones in balance, is through exercise—and it’s amazing just how good a sweat session can be for your health and wellbeing.

Did you know that your muscles serve as another endocrine organ that plays a key role in your METABOLISM by relaying messages to other organs such as the fat tissue, brain, and liver, and most certainly, by releasing hormones?

The five hormones that are influenced by your fitness routine: irisin, estrogen, testosterone, human growth hormone, and cortisol which can put you on a fast track toward becoming you healthiest, happiest self.

Irisin is referred to as the exercise hormone, which makes it your workout buddy. It activates genes that turn bad white fat into good brown fat, it regulates undifferentiated stem cells to become bone-building cells instead of fat storage and also protects brain cells from injury and aging.

Training stimulates Irisin production. A single training session of moderate intensity exercise, HIIT and weight training raised levels of the hormone by 12%, which is just another reason why women should train with weights. So, ladies let’s get moving and sweating to make more of this awesome hormone.

It is involved in the uptake and storage of glucose. When glucose levels are high Insulin is released to metabolize and store glucose in muscle and the liver. When high levels of glucose are circulating in your body, your pancreas becomes tired and can’t keep up with the demand which is called insulin resistance. Also, if you have a high body fat percentage your muscles and fat cells become less sensitive to insulin signals, so they are unable to take in glucose for storage. This means

glucose stays in the blood, increasing your risk for diabetes, infertility, and/or metabolic syndrome.

Since your glucose is stored in your muscles so it’s ready to be used when you need it. High intensity strength training helps build muscle strength and quality via hypertrophy, which promotes the activity of insulin receptors cells. This type of training along with HIIT improve body insulin resistance and sensitivity by improving muscle quality.

Estrogen is the most important female sex hormone because it plays a major role in the development of physical features like breasts, the menstrual cycle, and reproduction. It also affects bone health, cholesterol, and more, making it the master multitasker of your endocrine system.

Women need estrogen, but too much is a major risk factor for breast cancer. Most women, starting around age 35, develop estrogen dominance. Being active and training help reduce Estrogen, lowering the risk of breast cancer for premenopausal and postmenopausal women. Exercise reduces your risk of breast cancer, and reduces mortality after diagnosis and among survivors.

Testosterone is the male sex hormone, but it’s produced in women’s bodies, too in smaller amounts. It helps to grow muscle and is responsible for repairing muscle proteins damaged by exercise.

It plays an important role in your body functions, such as contributing to muscle and bone strength and its ability to regulate fat metabolism.

HGH is released periodically on its own, especially during sleep, but specific kinds of exercise have been shown to stimulate major production increases. Such as HIIT workouts, training that involves lifting weights and explosive movement.

Cortisol is referred to as the stress hormone—and for good reason. It’s in charge of regulating changes in the body that happen in response to anxiety and tension, feelings of the pressures of modern life. This leads generally to an excess of cortisol circulating, which increases abdominal fat. It is produced by the adrenal glands in response to stress, low blood sugar and exercise. It supports energy metabolism during long bouts of exercise by facilitating the breakdown of fats and protein to create the glucose necessary to help fuel exercises

Excess cortisol leads to a raging appetite, typically for the wrong foods.

What does Cortisol do?

Cortisol has a vital job as one of the body’s stress hormones, released as part of the fight-or-flight reflex. It shuts down less critical functions like reproduction and immunity to focus on fighting the immediate physical threat and breaks down tissue to provide the energy necessary.

The functions of cortisol are supposed to be immediate and short lived, enough to see off any physical challenge. This was great for cavemen fighting tigers -but less ideal in modern lives when stress can be psychological and constant.

The positive role of cortisol in your body

Cortisol has a vital physiological role. By raising plasma glucose levels at times of stress, cortisol provides the body with the energy it needs to face bodily attacks from injury, illness or infection. It has potent anti-inflammatory effects easing irritation and pain.

The negative effects of too much cortisol

Too much cortisol for too long can have serious, negative effects.

The tissue breakdown, reduced protein synthesis and conversion of protein to glucose can decrease musculature and increase abdominal fat, not an ideal result!

It also suppresses levels of growth hormone and sex hormones, which can reduce libido and fertility.

It lessens glucose usage and increases blood levels potentially predisposing to diabetes and its effects on calcium can increase osteoporosis.

Moderating cortisol levels is important for the maintenance of our health and wellbeing.

Exercise, stress and your Cortisol levels

Exercise is perceived by the body as a form of stress and stimulates the release of cortisol. In general, the more your fitness improves the better the body becomes at dealing with physical stress. This means that less cortisol will be released during exercise and also in response to emotional or psychological stresses.

THE FITTER you are, the less Cortisol is released by your body…

The time and intensity of exercise can affect the level of cortisol release. When it comes to exercise, more may not be better. Training for more than 60 minutes, even at a low intensity will burn up the body’s glycogen stores and stimulate cortisol release.

Short high intensity exercise such as sprints, HITT or weight training cause less of an increase in plasma cortisol concentrations.

However, the levels tend to surge if rest periods are short and work levels are high. This is particularly significant if exercising when starved or nutritionally depleted and was also increased by training in the early morning when cortisol levels are naturally higher and the response to exercise can be more.

What you can do to maintain healthy cortisol levels when training

It is possible to enjoy the undeniable benefits of exercise while minimizing the impact on cortisol concentrations:

Don’t overdo it. Take regular breaks from intense training and listen to your body.

Leave intense sessions to later in the day, when cortisol levels are lower.

Eat right to fuel your body and make sure you consume carbohydrates and protein after exercise to decrease the cortisol response.